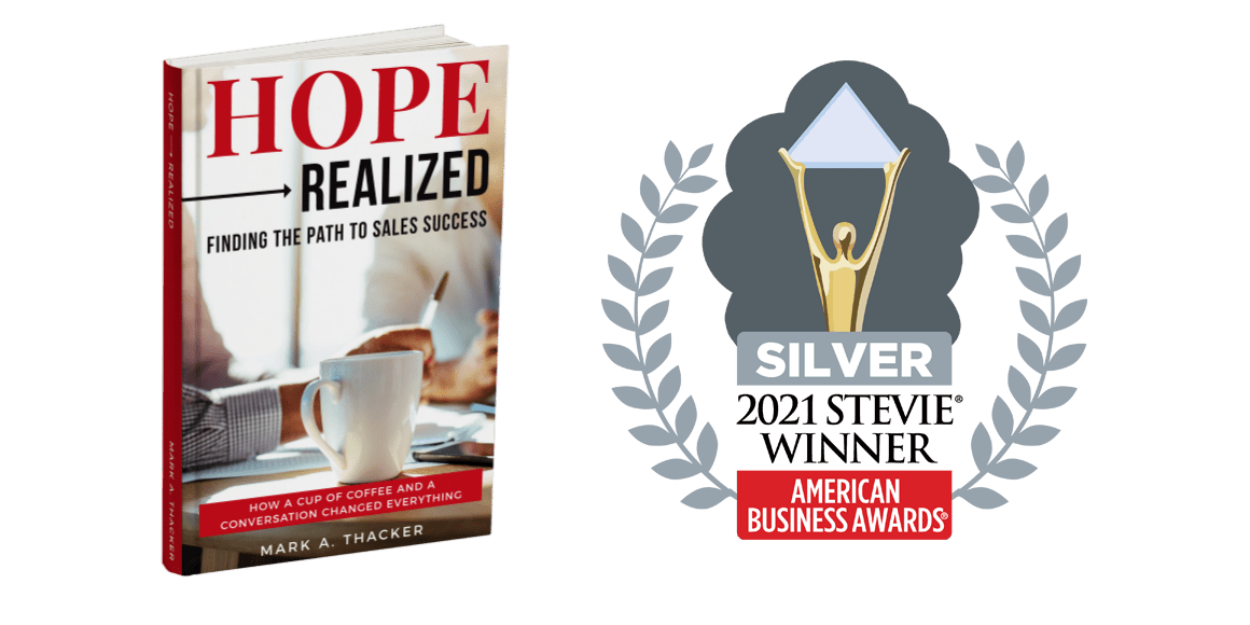 In large measure, my new book, Hope Realized: Finding the Path to Sales Success, is about a business owner named Steve who must find a way to bring his business back from the brink of collapse. Steve is heroic in that he recognizes that he needs help, seeks it, accepts it, and does what’s necessary to save his business, his family, and the livelihoods of his employees. Perhaps the bigger hero, however, is the other major character in this fact-based business fable: a sales management and leadership consultant named Vance.

It is Vance who took the leap of faith to become an independent sales consultant after leaving a career as a corporate sales executive. It is Vance who recognizes the depth of Steve’s crisis. It is Vance who steps in to use his experience, his expertise, and his hard-earned wisdom to help Steve find another path – a path not merely back to better days, but to days of greater success than ever.

Here is an excerpt from Chapter 6, entitled “Another Path”, followed by some brief closing insights. In this short excerpt, we are with Steve and Vance in a 1950s-style diner called The Fork. Other characters mentioned in this scene are the server, named Libby, and Vance’s old mentor, Charlie:

They spent the next fifteen minutes sipping the hot coffee and sharing personal and professional background information. Vance began, telling Steve that his last corporate role had been ten years earlier, at which time he had been “downsized” at what seemed like the worst possible time, with two kids in college and a new home being built, not far from the diner. Before he engaged in the next chapter in his life – his current chapter – as a sales management consultant, he had taken the classical route through sales: started “carrying a bag” in his twenties (fresh out of college) and then progressed to a District Manager, Regional Manager and then VP of Sales for the final 15 years of his corporate career.After the initial “glamour” of being a jet-setting company mover and shaker (top performer, he admitted) wore off, Vance had grown increasingly tired and resentful of traveling so much – four days each week, three weeks each month – which forced him to feel disconnected from his family. He admitted to missing out on many key events in his children’s lives. He admitted to leaving the burden of raising the family to his wife, who also worked hard serving others in a job she loved. And he admitted to putting career success before success at home.

Vance then stated, “I kept telling myself all these sacrifices were for the betterment of the family, but in reality, the sacrifices were more about my personal success. Oh, there isn’t any doubt that I wanted to provide a better life for my wife and kids – but a promotion, more money and prestige, and being in charge of more revenue and people … those things were the real lure.”

Steve looked down at the gray and yellow mid-Century-patterned Formica tabletop and then stared into his coffee, but Vance had continued: “I also came to resent the fact that the corporate higher-ups often didn’t listen to me about what needed to be done. I had all this knowledge, you might even call it wisdom, I guess, but they wouldn’t listen anymore. I had gray hair by then but limited control. I couldn’t understand why, as the person in the organization who arguably knew more about sales than anyone else, I wasn’t often listened to when considering a sales path for the company.”

Vance sighed and leaned in closer to Steve again. “After I got let go, and I finally had the time to step back and take a higher-level view of my life, I realized I had regrets. Deep regrets. About the choices I had made. About choosing work over family. About continually rationalizing that I was the one making the sacrifices; and not realizing that my family had made bigger sacrifices than I ever could.

“Steve, when the moment came and I was no longer VP of Sales in that rat race, I had two choices. I could venture back into the jungle and try to land something similar – essentially forcing myself back into a corporate culture I had grown to despise – or I could seek another path.”

Libby delivered the food, asked if they were “all good,” and rushed off to answer another food-ready-on-the-counter bell. Steve began eating his breakfast – unsalted – as Vance continued his story. He listened intently as Vance told him about Charlie, and how Charlie had helped him discover for himself what had given Charlie joy in his life, too – helping others. He listened as Vance recounted how Charlie had illuminated an option where he could help others while using his hard-earned experience and expertise and wisdom: consulting for small to mid-size businesses in need of sales and leadership guidance.

“I’m really fortunate that Charlie took me under his wing and opened my eyes,” Vance said. “Not only do I now have more control and a greatly improved work/life balance; and not only do I feel important and valued again – I feel like I’m making a real difference these days, because now I also have the opportunity to help these business owners and leaders take back portions of their own lives. Like Charlie was for me, you might say I’m a pathfinder, helping people like you, Steve, identify, illuminate and navigate pathways to new levels of success.” He paused a moment, as if reflecting on his journey. “Steve, I went from dreading what the next business day had for me to waking up excited by the opportunity to help make other people successful and happy. I guess I lead a pretty fulfilling life these days.”

So, what does Vance do for Steve? Well, you’ll have to read the book to find out the full answer to that, I suppose. But in general, Vance (like all successful sales management consultants), brings possibilities and alternatives to the table. He listens, observes, learns, collaborates, and challenges his client. He uses his sales leadership expertise, draws on his deep experience, crafts custom solutions, and helps his client navigate through difficult decisions. He is indeed a pathfinder. And because he puts clients on the path to sustainable success, he leads a fulfilling life.

Make no mistake, however. Stepping out on your own as a sales management consultant is not always easy. It takes a leap of faith. It takes courage to advance confidently in the direction of your dreams, as Henry David Thoreau once urged.

The good news, however, is that more than 100 sales management consultants, serving as Outsourced VPs of Sales, have discovered the same new reality that Vance experienced. Thanks to Sales Xceleration, you don’t have to go it alone or start from scratch. You see, at Sales Xceleration, we’ve created the proven sales systems and tools that make it much easier to confidently serve small to mid-sized businesses – and live a life of purpose and fulfillment.

So, if you are a seasoned sales executive with a history of leadership and success, let’s get better acquainted. Find out why we’re one of Inc. Magazine’s “5,000 fastest-growing privately held companies in the U.S.;” and how we can help you achieve rapid professional growth as well. To learn more, click here or simply contact us today at 844.874.7253. (And to read more about Steve’s journey and Vance’s life-changing services, click here to get your copy of Hope Realized: Finding the Path to Sales Success.)