How Silence Can Help You Sell More

Salespeople are human. In other words, we make mistakes and often do things that prevent us from actually closing the deal. Perhaps the single most common mistake a salesperson makes when nurturing a sale toward the close is… talking too much. Surprising as it might seem, saying too much and filling every lull in the conversation can be detrimental to information sharing and deal-making. It stands to reason, then, that the opposite is also true: silence can be one of the most effective sales techniques in the salesperson’s arsenal. The key, of course, is knowing when and how to use silence in the sales process.

Why Silence is a Powerful Sales Tool

In conversation, often the most powerful moments are not when you are speaking but when you pause to learn from the other person’s perspective. Too often, however, we rush to fill those empty moments, perhaps out of fear that the expanding silence will feel awkward.

Truth is, it’s better to let the silences happen; silences in a conversation have a wonderful way of coaxing deeper thoughts to the surface. In fact, the most important words between you and your prospective customers are the words spoken by them – not by you. Why? Because the silence will be filled with the prospect sharing more information. Think about that for a moment! You get more information out of the customer without saying anything. Powerful stuff, right? It gets better. Typically, what the prospect shares when filling a silence is more valuable than what gets revealed in the standard course of a normal sales conversation. 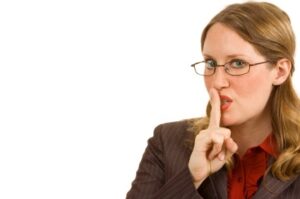 Silence is also a powerful sales tool because it is seldom used – or used well – by inexperienced salespeople. Why do novice salespeople say too much? Because they don’t yet trust themselves at executing their craft. But what the best salespeople will learn over time is that true conviction is best conveyed not through more words, but fewer. Consider, for example that the Bill of Rights is a mere 660 words, Lincoln’s Gettysburg Address is 267 words, and the Ten Commandments are expressed in just 163. Say less; communicate more!

How to Use Silence to Your Sales Advantage

Research shows that after asking a question, the average salesperson waits no more than 2 to 3 seconds before rephrasing the question, answering it themselves or moving on to another topic. Again, it’s that fear of the awkward pause. (And my experience shows that normal salespeople have NO idea that they’re doing this.)

But by filling every silence, you sell yourself and your solution short. Your greatest power as a salesperson is not in what you say, but in who you are and who the prospect perceives you to be. Do you want to be seen as self-serving and rude? Or would you rather be perceived as an empathetic listener and a problem solver? Resist the urge to fill every moment of silence with your voice. As the saying goes, God gave you two ears and one mouth; use them in that proportion.

To use silence to your advantage (and ultimately to the customer’s benefit, too), ask thought-provoking questions like “What is the one thing you or your company could do in the next 12 months that would dramatically impact your sales?” A question like this begs an answer that isn’t just a pat response. It makes them stop and think, “Hmmm. What would that one thing be? New offerings? More calls? Additional money in our marketing budget? Which would have the most impact?” To craft a thoughtful response, of course, the prospect might need a few moments of silence to ponder and organize a response. Let that silence be! When the answer does come, you’ll learn a whole lot about what’s going on in their organization, what the big challenges are, the decision maker’s perspective on the issues and solutions, and so much more. Studies show that the prospect will need 8 to 10 seconds to formulate the start of their answer. And once they get talking, they think of more ideas. If you cut them off after 2 to 3 seconds, you’ll never learn the deep and meaningful answer that can inform your ability to provide the right solution.

When you first start to allow strategic silence to occur, you will likely be absolutely miserable. (This is the voice of experience talking!) Nothing will seem harder. You’ll be squirming and dying to jump in. Don’t do it! Keep counting silently to yourself for at least 8 to 10 seconds. If you do feel that you must fill an awkward silence, say something like, “I know this is a complex question that requires a thoughtful response. Take all the time you need.” That will help remove any pressure the prospect might be feeling, as well.

Silence is the salesperson’s friend. It can help you appear smart, credible, considerate, and empathetic. It can help you get deeper information so you can truly cure the customer’s pain through the right solution. And ultimately, it can help you build a client relationship based on trust. Silence truly IS golden. Give it a try!

Find a Sales Consultant in your area to learn how one can help you build a path to more sales.

The Business Process Outsourcing Trend: How BPO Benefits Businesses of All Sizes
August 17, 2015

Prepared to Lead Your Sales Team This Year? Here’s How to Make Sure!
August 17, 2015

Why Outsourcing Leadership Roles Is the Best Business Decision You Can Make
August 17, 2015

Why the Remote Work Revolution Should Squash the Stigma Surrounding ‘Part-Time’ Leaders
August 17, 2015

Hope Realized provides the steps necessary to put you on the path to freedom, security and prosperity.

How We Help
FAQ
Go to Top